After months of hinting and speculation, Google has finally pulled the improved and overhauled search console from beta to live status.

With that update comes a few new tools and some old tools moved to the new interface. Google seems to have meticulously gone through feedback and suggestions to determine what the new search console needs to achieve. The new search console went live with the manual actions tool (migrated from the old search console) and the new live URL checker as part of the toolbar. If you work in Digital Marketing, Online Advertising, Search Engine Optimisation (SEO) or work as a Webmaster, the following update will be of interest to you.

While most of the updates to the new search console have largely been focusing on migrating existing tools to the new interface, Google has developed and deployed an exciting new tool for the new platform. The new URL inspection tool was launched officially on the 25th of June this year. The tool provides comprehensive information on the crawl, index and serving status of your web pages, directly from the Google index. By simply entering a URL that you own, the tool provides you with the last crawl date and status of the page and any URL error that has been caught. The same tool provides you with information on why a certain URL has not been indexed and with quick access to the report, webmasters’ lives are made easier, by allowing you to identify other pages that are plagued with the similar issue. 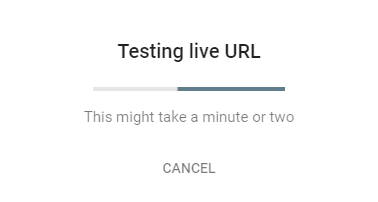 However, with the latest update on September 04, when the new search console came out of beta to live status, Google added to the functionality of the URL inspection tool. So far, the tool allowed users to survey the status and issues of individual URLs based on the last crawled status of the page. The recent update brings out a live test capability to the tool wherein users would be able to test the individual URLs for errors and debugging tasks on the live version of the page. Once and if the error is fixed by the user, the tool allows the user to request a re-crawling and re-indexing of the page instantly.

Since the announcement of the new interface, Google has been releasing updates to search console in instalments. The updates have been conducted based on user feedback and what Google is calling “common use cases”. Since the beta version released at the beginning of 2018, Google has migrated some of the existing tools and functions to the new search console. The latest update saw the manual actions tool migrated to the new interface with it now being accessible directly from the overview section. Prior to this, Google focused on moving other existing features such as the mobile usability report and link reports (which now consolidates the links to your site & internal link reports from the old platform). Additionally, Google also focused on updating and improving the site and user management functions on search console. One of the most significant changes to the platform is the access to 16 months of data within search analytics. This is expected to be quite beneficial to webmasters and digital marketers alike in making informed decisions.

What’s Next For Search Console

As per what Google has stated, the new search console will be constantly updated. Features, functionalities and tools from the older search console will be moved to the new version as soon as an equivalent version is available. With the introduction of the Live URL testing tool, Google has also shown signs of developing new features that could prove to be quite beneficial to webmasters and site owners.

Digital Strategy Consultants Ltd. is an IT & Digital Consultancy agency located at the Digital Hub in Dublin. Founded in 2012 with a passion for digital marketing and a drive to bring innovation and a new level of best practices to the industry. Following a data and research-led approach, we specialise in – Web Design, Web Development, UX/UI Development & Design, Online & Digital Advertising, Search Engine Optimisation, Digital Analytics & Reporting, Conversion Rate Optimisation & Social Media.